How about a cheap serial terminal for less than a fiver all-in?

In a previous blog entry I’ve been working on more developments for the increasingly powerful home control system using an Arduino as a kind of universal I2c peripheral to the ESP8266. The reason for that is just the vast range of driver software our there and the fact that from China you can get an Arduino-Nano-type-board for under £2. There are drivers for just about everything so it seems daft to just ignore that. It ends up cheaper than most actual i2c peripheral boards.

First thing I had to do with the Arduino base code was increase the size of the buffer used for storing I2c and that is covered elsewhere – but finally I got that working. In the process that led me to the idea of a prototyping board with both the ESP8266, running the home control 2016 software AND a 328 to power some peripheral devices and give extra IO pins.

In the process of THAT I got the QDTECH boards running (128*160 LCD – cheap) – and that also is covered in a previous blog entry. These are great – and cheap (though not as cheap since Banggood jacked the price up but thankfully there is still AliExpress – thanks to Squonk for that particular link) but they are a little limited in terms of resolution as any kind of terminal. I even found a little bit of code to do vertical scrolling. Fast enough but then it is a low resolution display.

In the meantime however I pulled out another favourite display of mine, the ILI9340-driven displays at 320*240 – at £3.47 – mind you if you go to the Italian version of Aliexpress they seem to go down to just over £3. The increased resolution of these means you really COULD make a nice monitoring terminal but for one thing – speed.  I checked out several implementations including the Adafruit ones and the drawing speed is atrocious – attempts to scroll the display are generally abysmal unless you use a fast processor. 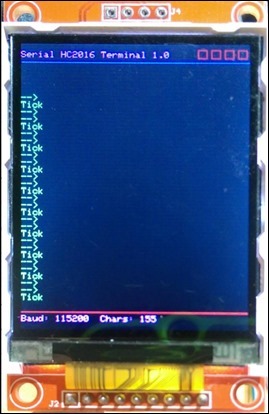 And so it was that I stumbled on THIS article.  The funny thing is that this is on an Arduino site – but points to an article that is anything but Arduino –the fellow has written some FAST code to chuck out small text in the form of a (subset of a) VT-100-compatible terminal. But the code needed you to use the C++ compiler on the command line, NOT in the Arduino environment – and that was no good for me as I have to add other stuff. But if you take a look, you’ll see my late hours have been FAR from wasted.

In the picture on the right (depending on your screen) you see this terminal running – it has  2 fixed areas and a scrolling area and it is fast.

The first problem was that this needed to be compiled outside of any environment and it simply would not work for me – the linker had issues and so on. I realised if this was to be useful – it needed to be inside the Arduino IDE where I could shove in all sorts of other code including my I2c connection.

I opened up a NEW Arduino project, copied all the files in there and renamed the primary file to be the same as the project. I then put the contents of his MAIN() code into “LOOP” – pulling out initialisation and putting that into “SETUP()”.  Stunningly, it all SEEMED to work – I just don’t have that much luck normally. However any attempts to use the serial port failed miserably. So I threw away his serial code and put in the normal Arduino serial – that worked just fine – but when I actually tried to do anything with it other than “hello world” – I got garbage characters.

I was reminded of the work I’d done to expand the I2c buffer on the Arduino and that reminded my that the normal Arduino serial buffer is a staggeringly useless 64 bytes.  I’m including hopefully helpful links here as you can fix this stuff. Despite the limits of the Arduino default software settings, I need way more than that so I increased the buffer to 1K, using up a significant amount of Arduino RAM. Voila – perfect.

As it happens I’ve been experimenting on a 1284 chip which while being Arduino-compatible kind of, it does have another serial port, so without disconnecting my FTDI – I hooked up the second serial port to the home control serial and fired the DEBUG command at the latter.

As you can see on the left, a perfectly usable terminal and now with programmable on-screen LEDS and baud rate control stored in EEPROM. At this point despite YEARS of VT-100 wilderness I’d mastered the colours and scrolling area controls – thanks to this handy VT-100-related link.

I’d even noticed that in the code, there was a fast horizontal line command. Putting the driver code side by side with the Adafruit code for the same chipset, there were similarities. I should be able to drop in a PIXEL command to get a dot up. YES, with slight mods it worked. For my next trick I would add in a fast VERTICAL line routine from Adafruit – and then – the general LINE drawing routine and the world would be my oyster.

Erm, not quite – the Adafruit SWAP routine caused me endless issues – but I replaced that and all is now well.  What’s important here is that this is FAST.  I’ve put a little character count on the bottom status line so we know that something is actually happening in the case of repeating commands… and this could form a great plug-in for our prototyping board – or indeed any kind of experimental setup where having a dedicated little serial monitor costing next to nothing would be handy.

The code is currently sitting on BitBucket. Oh – and if you use these displays, don’t make the mistake of thinking, as they run on 5v that the LED power should be 5v. It works for a while but I just burned a LED out on the larger display – and yes I’d noted that it was running a tad warm and didn’t twig.  Now the LED supply is connected to 3v3 and it is just fine (apart from the one bust LED). I could probably do PWM brilliance control but that’s something for later. Right now I’m running the entire display on 3v3 and it is just fine. My tiny 3v3 regulator on my boards isn’t even breaking a sweat.

In the VT-100 command-set, they refer to a command to turn LEDs on and off, 4 of them in fact and I thought that might be fun to implement – now bearing in mind I’ve no prior experience of the switch statements used in the VT-100 code I managed to get this lot running this morning.

On the top right of the image here, you’ll see 4 simple rectangles in red – filled or not. The state of those LEDs can be controlled as follows…

That apparently is the standard though WHY it won’t let you turn an individual LED off I don’t understand so I’ve extended this so that 5 turns off  LED1, 6 turns off LED2 etc.

I now have code running native on the ESP8266 to handle this display and the terminal – so as not to detract from this article I’ve split this into another article – but you can see the first attempts running here… https://www.youtube.com/watch?v=qBxXZcleKq0

Registrations with no name or suspicious looking email addresses will be considered to be spammers and will be deleted. Don't forget to tick the box so you will get email follow-ups to comments. We've a great community in here. Spammers and "guest post" companies beware - you have NO chance of success and a good chance of getting spammed badly in return.

Please note that user names ending in SIBIA will be deleted as well names that look like commercial ads - please don't waste your time with the above or spam.

When dealing with wall outlet (high) voltages you should satisfy yourself that whatever you are doing is safe and if unsure, seek advice from someone who is sure.
Copyright © 2021 Peter Scargill - All Right Reserved