Just a very quick one (and somewhere to park the conversation)– there’s a new Raspberry Pi update out promising a new smoother, simpler look, better video etc. Up to now it looks like the claim is correct.

I have several RPI installations…including TightVNC and so I didn’t want to lose that. I did however, want the Chromium browser. I’m not interested in PI-HATs and similar so here’s all I did to get the upgrade…

That’s it – nothing more –takes a few minutes all in – there is one Y for confirm and a reboot – and Bob’s your uncle. To test things out I went to the BBC website and of course got the usual message about Flash – things haven’t change there much – but with a signup for the BBCs “beta” HTML5 version (it’s a bit late for a beta, isn’t it? HTML5 has been out  for longer than I can remember) all is well, videos no problem! 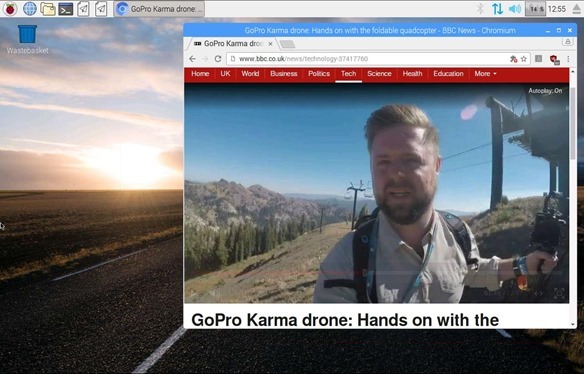 The new interface is to be given it’s own name “PIXEL” – that’ll make searching for information about it a whole lot of fun… they could have picked something unique like “PIXL” or something – however it all seems to work – more modern appearance – slick – file manager is nice and apparently if not faster it is at least no slower than it’s predecessor so really no reason not to go for it.

Here’s the link in case you need more info. Given this new look – with hardware graphics support – which likely means you could be using your Raspberry Pi 3 for a media centre… AND the best backup program out there which can replicate the system even on a different size SD  -something as far as I’m aware NO-ONE else has – one has to ask – what are the other SBC board manufacturers going to do now!!!