On the surface of it the Xiaomi Mi 4 looks like it’s predecessor, the Mi3, but it is NOTHING like it. The original was/is a fine, mono display smart band which my wife LOVES, but the Mi 4 is a full colour model while still retaining the best part of a month battery life – 20 days according to Xiaomi and straight away I went WAY past that with some very enthusiastic use including downloading hundreds of watch-faces – the band has hardly been off my wrist (now including swimming in the sea and taking showers) and I’ve fully charged it only twice since I bought it -well over a month ago..

Xiaomi have provided us a much needed watch face library and this smart band also supports various independent watch-face libraries and CRACKING software like the MiBand 4 app. 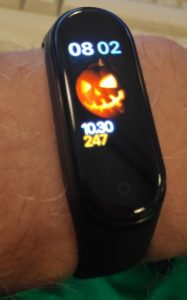 I love it. The Mi 4 blows the socks off both the Huawei Honor Band 4 and 5 (good as they are) – at least in terms of choice of watch faces. At the end of 2019 (Dec 29, 2019) this is still my favourite band – which I alternate with the FAR more expensive Samsung Galaxy watch depending on the occasion. Both lead the way in terms of watch faces.

A recent automatic Mi 4 band update (4.0.7) for the “Mi Fit” App temporarily scuppered the “Amazfit” watch Faces. I wrote to Amazfit and within hours received a response to say they would fix this at the next update. They did. What service!!

The MiBand4 app in particular is REALLY easy to use.

Despite the Mi 4 manual coming entirely in Chinese, on initially opening the box, I noted a QR code inside the manual and scanned that with my Pocophone F1, which then loaded up the Mi Fit App. I initially let the band (or rather it’s detachable central module) charge for an hour or so before doing anything – just as well as all I got was Chinese output initially. Once Mi Fit was installed on my phone this was sorted automatically

I already have a MI account but signing up is easy. Once signed in, the band started to display in English – job done. No ECG or Oxygen levels in this model – indeed facilities are basic compared to some – but the quality is very good. As soon as the watch had charge in it, both the app and the firmware updated to the latest versions.

If the many faces on the MiFit application are not enough for you, install the Amazfit and Mi Band 4 apps – I don’t have room here to show more than a small selection of faces…

My initial reaction to all of this was to say “well, yes but it isn’t that bright in sunlight, But it turns out that default initial brightness was only half way up and as soon as I discovered that, I turned it up to full and left it there. So you CAN see the faces in bright lighting. There will of course be a battery charge life trade-off but I eventually caved in and recharged the band – after more than 3 weeks of heavy duty use. I could have waited a few days more. 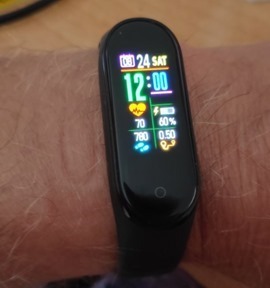 You can get the bands in a range of colours and I have a few Caribbean versions though I keep reverting to black – call me old-fashioned. The watch handles sleep monitoring, alarms, reminders, pulse checking and sports.   You can play music stored on your phone. Bluetooth is v5.0 and the watch is waterproof to 5m – I HAVE actually deliberately tested it in the shower and also in the sea.

At 29 Euros from Banggood (checked August 24, 2019)  the Mi4 is a bargain – here in Spain I recently bought an un-branded similar-looking band for 26 Euros, took it to our local fresh water pool and that was the end of it.  Recently accidentally leaving the Mi4 on in the same pool did absolutely no harm.

Charging is via a supplied cradle-type USB lead – easy and up to now, utterly reliable.

Having tried out so VERY MANY watch-faces, I have a problem – I found the best one and so now I can’t beat it. Oh, well, choice, it’s a terrible thing.

This site uses Akismet to reduce spam. Learn how your comment data is processed.

Hi - I'm Pete and this is my technology blog. It is big. It is also the home of "The Script", Node-Red-Contrib-Bigtimer, "esp-go" and many other useful tools and gadgets as well as regular, independent and often long-term product reviews and more.