Remind you of IKEA? No? Heard of ESP8266? Yes? Well, Slampher and Sonoff are two products from Itead and I think you’ll like at least one of them. They arrived at my desk today. Slampher is a screwfit lamp fitting – take the E27 lamp out – put Slampher in – screw the lamp back in and you’re in business with a remote controlled lamp. It really is that easy.

There’s a tiny button on the unit that you press to turn the lamp on or off manually if you ever need to – or hold it down and you can make it listen for a controller – the handy – and i have to say very nice quality – keychain controller which can control 4 devices. 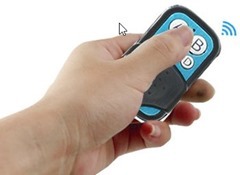 The REALLY good thing is that both of these products use ESP8266 so if you want to go in and re-program them – as I have  – to handle MQTTon your WIFI!!!! You CAN do but there is an APP if you don’t want to do it the hard way. I don’t have the App at this time so I can’t comment… but it’s an ESP8266 – how hard can it be to get that right. 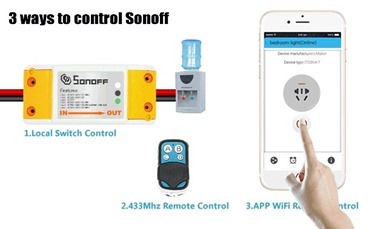 The other product is called Sonoff and it’s just a little box that you wire mains into – and out the other end you fasten it to whatever you want – and control it the same way. SO the units obviously have both WIFI (ESP) and a 433Mhz receiver – because the little handset is 433Mhz.  Sonoff would not look out of place on a skirting board at all (proper little screw connectors inside – no soldering needed).

These are NOT expensive – in fact that really IS the point – Sonoff in particular – I could not build one at that price – and I guess that is part of the charm.  I can make this stuff with my eyes shut but by the time I put it all together and in a box….

The units I have are solid looking – the little mains controller Sonoff – the PCB inside is well put together with proper isolation on the PCB (some of you will have seen some HORRIBLY DANGEROUS pcbs in the past when it comes to UK mains but little Sonoff is ok at least at first glance).  I’ve not had a chance to pull the lamp unit apart yet – that will come later.

DIY programming: You’ll like this if you know how to program ESP8266 chips. I now have a diagram for Sonoff – initially the connectors did not seem to match those on the diagram – so I contacted Itead – they were keen to point out that they have a cloud system and App and of course the remote control via radio – all of which I’ll lose when I reprogram the board – but hey…. I want to control these with MY kit.

Look at the diagram below… this is looking at the TOP of the board. There is a 4 way or 5 way connector. If the latter you might want to get the meter out – but on the 4-way (mine)….  the SQUARE pin is not as you might think ground – it is 3v3 – then we have serial, serial and ground. If you wire your FTDI as per the wiring diagram below it should work.  The relay is controlled by GPIO12.

I was happy to see cooperation from Itead – obviously they would prefer that you use their cloud software and most will – but we are hackers and would never be satisfied without control, right? Ignore the LED, it is fastened to the RF device so you don’t have control over that. Right now I don’t have enough info to make any use of the RF device. If someone knows better please write in. Would be nice to have both.

Warning – you are on your own if you start this – you will need your own software and messing with the board will kill any warranty.  Clearly this must NOT be plugged into the mains while programming – use FTDI at 3v3 settings. No doubt 5v would cause damage. 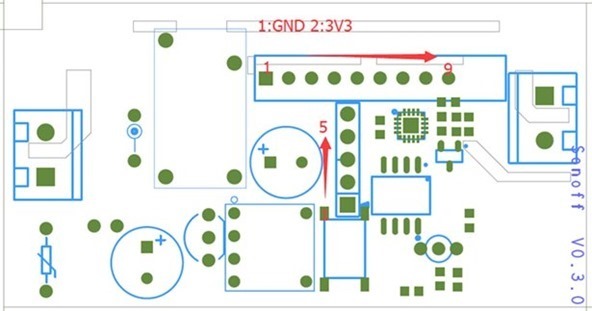 CLARIFICATION – the square pin is NOT ground – the square hole is 3v3. You should see that the round hole is connected to the flood filling (if you have good eyesight).

Use FTDI at 3v3 setting – in the original boards,  press the large button –THEN power up FTDI. DO NOT connect mains power while doing this – you will fry. Test MQTT connectivity, disconnect, put back in the box, use. NOTE – the newer boards marked RF do not seem to attach GPIO0 to the button – see later blog – it may be necessary to make a VERY find short at power=up – of two surface mount components.

As for actual use.. here’s the interface in Node-Red

Complicated, isn’t it. The node on the left is one of Andrei’s UI components – the node on the right is the standard MQTT connection – all of course running on my Raspberry Pi2 and already in charge of the heating and a load of experiments.

and here it is – waiting for the screws which for the LIFE of me I can’t find… works a TREAT. The output relay is on GPIO12.

I have modified my general purpose MQTT software to run with the Sonoff devices and it works a treat.  https://bitbucket.org/scargill/esp-mqtt-dev   – see the home control 2016 project in here where you’ll also find binary files.  A couple of settings need changing from normal – I normally use GPIO2 for WIFI setup and the SONOFF WIFI units use GPIO0…  also  – GPIO13 which I use as a status indicator – turns out the Sonoffs use them but reference 3v3 so I have an inversion setting so they flash off most of the time instead of on all the time – it’s all in the DOC file in the project above. With both of those settings updated… you can also use the button as an on-off button if you like (toggle).

The SONOFFs have only 1MByte of FLASH which would kill off OTA for all but the simplest of projects – my code needs the larger size IF you want OTA. With this in mind, is it worth paying extra for the Electrodragon? Some say the quality of the latter is not so good? But they do use an ESP-12 which will have the normal 4Mbytes of FLASH… what do you think. Update Jly 2016:  The Electrodragons didn’t turn out so well – but now I’ve just proven that it is in face easy with a fine soldering iron to fit a £0.37 32Mbit FLASH chip to these, replacing the original – which means full OTA and no problems expanding.  See https://tech.scargill.net/32mb-esp01/ for more info.

July 2017 – By now most of us are familiar with the Sonoff units but there is always the cost of postage..  https://www.banggood.com/DIY-Wi-Fi-Wireless-Switch-For-Smart-Home-With-ABS-Shell-p-1019971.html

309 thoughts on “Itead Slampher and Sonoff”

Hi - I'm Pete and this is my technology blog. It is big. It is also the home of "The Script", Node-Red-Contrib-Bigtimer, "ESP-GO". ramblings about Tasmota, Raspberry Pi, Arduino and many other useful tools and gadgets as well as regular, independent and often long-term product reviews and more.