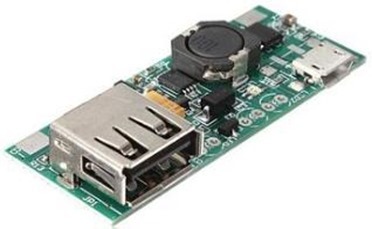 Ok, here’s another one for you – this time a DIRT cheap UPS (that’s my theme for this week it seems – CHEAP) – but with the caveat that MAXIMUM draw is 1 amp.

Now – you may think that isn’t enough for a Raspberry Pi or whatever but headless with no ports – should be no problem I am told.

So – a little while ago I bought a  variety of little USB charger PCBs and one of the least expensive at £2.40 was this one from Banggood. Others I tested have an on-off button which has to be pressed for the output to come on – OR they won’t work when charging – or BOTH – so they’re all sitting in the bin despite one having a very nice blue LCD display.

But THIS one WORKS – you can run something on the large USB connector – while CHARGING the battery (a single 3v6 Lithium battery) – and any combination – i.e. you can plug the charger in and out and the output remains constant. 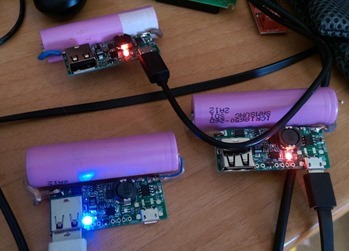 So – if your requirement is for under an AMP – you might want to get a Lithium battery and one of these.  For batteries I have a boatload of these as you see in the picture on the left, from an old laptop battery – turned out when I dismantled it that ONE cell had failed and the rest were spot-on – I put them on a shelf for the day they may prove useful.  Typically they are 3v6-4v2 at maybe 4.2Ah (I have some Ultrafire batteries of that capacity)

So taking step-up efficiencies into account, if you’re looking at a fully charged battery and a gadget using half an amp, you could be looking at keeping it running for maybe 6 hours with one of these? Not bad for under £3 + battery. You COULD connect more than one battery in parallel to increase capacity – and the advert even claims that – I’ll leave that to you as I’m not an expert on parallel Lithium batteries but it seems to me that to do that they should be pretty much matched.

The unit has two surface-mounted LED lights (could also be brought out as standard LEDs to a front panel) – red for charging – blue for load.

To put this to the test: I took a flat Lithium battery that had been sitting in a drawer for months – soldered it to the charger unit and plugged in a fully laden FriendlyArm NanoPiM1 complete with HDMI, wireless keyboard and mouse – this is WAY more than anything I’d considered but good for the ultimate test.

The M1 lasted about 10 seconds before the battery gave up.  That’s pretty much what I’d expected as the battery was flat – what was to come next would be critical.

I plugged in a decent USB supply to the smaller charger unit. The red charge light came on. No output. About 20 seconds later – the blue light came on, the output fired up and the M1 powered up without issue.

As the battery was charging – the M1 was doing just fine. The charger unit was running HOT – but then that’s what I’d expect – it was having to power far more than I would normally give it AND charge up a totally flat Lithium battery. Not exactly a typical situation. But it was coping. Just to push my luck – I was intermittently pulling out the charger lead and the M1 continued to run rock-steadily. 6 hours later both lights were on but temperatures were now down to “pretty warm” with the battery at “just warm” with the battery sitting at 4.17v. I disconnected the mains charger at which point the battery voltage dropped to 4.11v.

I finished off this blog article and checked my mail, a process which took maybe 15 minutes at the end of which the battery was just fine sitting at 4.06v.  Later this morning I took the charger off momentarily and then forgot out about it – went off to do some painting – 2 hours later the battery was still at 3.8v and the NanoP1-M1 was happily sitting there.

Overnight I left the M1 on the unit, on charge and the charge light has still not turned to green which is interesting – yet the tests show that the battery IS very much being charged. I guess the load must be pulling the voltage to just below the point where the charger considers this a full charge. During the evening last night I disconnected the mouse, keyboard and hdmi lead. This morning, the battery is cool, the charger is cool, all is well with the M1 and the battery voltage is sitting at 4.18v

Which is more than can be said for the blog which apparently came to a halt last night due to the number of people looking in!!! All fixed now thanks to a prompt response from the service provider.

I’m impressed  – I have three of these units, but now I see how useful they are, I can see more of them on the way.

Update April 2017: With a really flat battery, plugging in a Raspberry Pi 2 and power, the RED light on the unit activates- but sadly the battery does not appear to charge and the Pi does not come on. If the Pi is disconnected, the battery voltage immediately starts to rise. If the PI is then reconnected, the Pi works and the battery continues to charge.  Sadly, at a stroke, this makes the unit useless in the event that the battery becomes completely flat.

Update September 11 2017:  A picture is emerging here of manufacturers having to content with existing chips – the lower priced ones having severe limitations. Aidan and I have been discussing the subject.

The REASON we have problems with a lot of these designs is becoming clear.  Let’s say we need 1 amp – plenty of cheap voltage boost chips out there that will do the job. On the charging side, the most popular chip can charge at half an amp – and therein lies the problem.

Take a board like the one I’ve described – fully charged battery. Runs perfectly as the charger is not having to deliver much. On the other hand starting with a FLAT battery , we are expecting the charger not only to deliver a heavy current to the battery – but ALSO the full 1 amp to the unit it is powering – not going to happen. Now – you COULD say – what about simply using the input power supply, to power the load directly when there is mains power – and that’s the OBVIOUS question. DIODES is why. At heavy current even a schottky diode loses up to half a volt and you have to OR the two outputs together with diodes. So that’s no good.

So how about – using diodes to OR the battery and the input power supply to the boost converter?  That’s a BETTER idea but flawed… as that also lowers the potential voltage going to the boost convertor and these chips are not that good at delivering power when the incoming voltage is below 3v (battery minus diode drop).

Another way would be TWO boost convertors – chucking out 5.5v or so – dioded together to provide power – one gets power from the battery – the other from the incoming supply.  This one has merit and the likes of the MT3608 are cheap and at the output end, voltage loss is not a problem as you can simply compensate. When I say cheap – I mean REALLY cheap. Current thoughts are that one output would be maybe 0.1v or so higher than the other so that while there is mains power, the battery side is supplying nothing. As soon as power fails, the battery side takes over.  This would work without any controller as the chips handle over charge and over discharge protection but I still fancy a 328 in there to warn any Pi or similar computer that a power outage is on the way.

Here is some interesting reading on the subject..

If cost is not an issue, there’s a boost chip called the TPS61030 series (TPS61031) and this one is able to throw out over 2.5 amps with a 3volt input. At at 2.6volts it can STILL output over 2amps – it is however a lot more expensive than other alternatives and from a small production standpoint the chip packaging isn’t ideal.

So looking ahead I plan to play with the two-boost option – but right now a couple of Orange Pis just turned up for me to play with – priorities.

Hi - I'm Pete and this is my technology blog. It is big. It is also the home of "The Script", Node-Red-Contrib-Bigtimer, "esp-go" and many other useful tools and gadgets as well as regular, independent and often long-term product reviews and more.